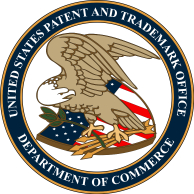 Last week, the USPTO director, David Kappos, submitted this letter to the Patent Public Advisory Committee with the USPTO’s fee proposal. The director’s letter detailed (among other things) why the USPTO needs to increase fees, one of the reasons being the need to have funding to reduce the large patent application backlog. The USPTO intends to increase fees collected by 10% (over current revenue) in 2013 and an additional 5% (over 2013 revenue) in 2014 in order to fund the process of eliminating this backlog. According to the director’s letter, the application backlog will be sufficiently reduced by 2015 so that filing fees can decrease in 2016. 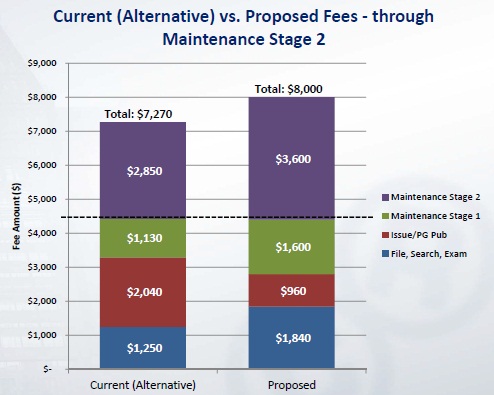 The director’s letter also discusses how the USPTO will not make money from the front end of the patent application process (filing, search, and examination fees that are paid upon submission of the patent application), but will rather let filing fees be lower than “full-cost recovery.” The intention is to encourage a greater number of applications, and then make up this front-end subsidy by setting later fees, such as patent maintenance fees, above cost.

This plan will be implemented by decreasing the issue and publication fees. The figure shows how a patent applicant will pay slightly less over the course of the patent examination process (blue and red bars) under the USPTO-proposed fees, but then will have paid more by the time the second maintenance fee is paid (which occurs 7.5 years after the patent issues).

The table below summarizes the proposed maintenance fee increases.

Note: All fee amounts listed in the figure and table above are for large entity patent applicants.

As I explained in my previous post about micro entity fees, a “small entity” is patent applicant that falls under one of the categories listed below and has not assigned or licensed any rights in the invention to any person, concern, or organization which would not qualify as a small entity.

A “micro entity” is a small entity that:

The Patent Public Advisory Committee will hold two hearings on the proposed fee increases. One of them occurred today, February 15. The second hearing will be held Thursday, February 23 at the Sunnyvale Public Library in Sunnyvale, California. Following these hearings, the USPTO will continue to follow the fee-setting process laid out above. The USPTO hopes that its proposed fees will be effective sometime around February, 2013. I will publish updates as progress is made.