A couple of years ago, the U.S. Patent and Trademark Office released its Patent Pendency Model (PPM) Simulation Tool, a spreadsheet that outputs the predicted total number of unexamined patent applications in inventory at the end of each fiscal year and the predicted ratio of first actions compared to filings (a number which shows if/how much the patent application backlog has been reduced that year). I thought it would be interesting to compare the predictions to the USPTO’s actual performance over fiscal year 2011.

The USPTO has used similar models since the 1980s, but only recently has it made any such predictions public. The model includes results through 2016. The main inputs into the model are: current patent application backlog, number of patent examiners, examiner productivity, and predicted number of patent filings. The most useful outputs (to a practitioner, at least) are the pendency numbers–how long, on average, it will take for an applicant to receive both his first office action, and how long until the application will issue as a patent. (The “ideal” application backlog for the USPTO is 10 months–or with the current examiner workforce, around 290,000 applications in the queue.)

In reality, according to the USPTO Performance Dashboard for September 2011, there was a backlog of 669,625 patent applications at the end of September, with a total of 505,557 UPR applications filed in FY 2011. Thus, even though patent application filings exceeded the expectation by about 10%, the resulting application backlog was only 6% greater than expected.

For the upcoming year, the model predicts that backlog will continue to decrease year-to-year until 2016, when it will hover around approximately 350,000 applications (a ten-month inventory for the anticipated workforce of almost 5500 examiners) and pendency will decrease to 8.9 months (first office action pendency) and 18.8 months (total pendency). Whether these lofty goals can actually be met remains to be seen. It may be helpful to see that the pendency numbers have not improved over the previous three years. 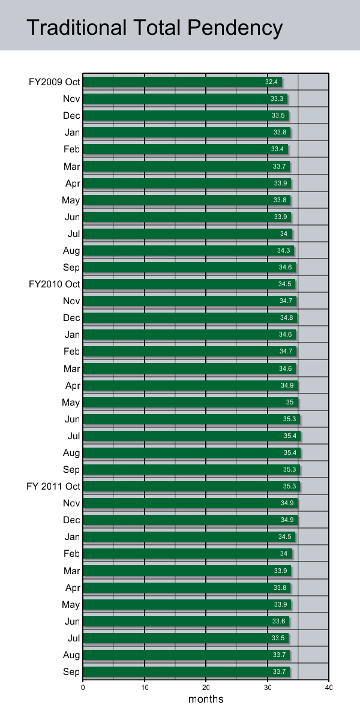